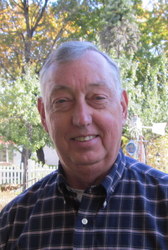 Age: 69
Years of residence in Sandpoint and Bonner County: 42+ years
Marital status/family: Carol and I will celebrate 44 years of marriage this December; we’ve lived in Sandpoint for nearly 43 of those years.  Our four daughters, Kara, Kelsi, Becca and Johanna were all born here.
Contact information:
208-263-5809
[email protected]

Recent or pertinent employment history: I am retired after 35 years with Panhandle Health District.

What particular experiences or skills qualify you for office?
I worked for 35 years in Public Health with the Panhandle Health District and always felt I was there to serve the public.  My No. 1 philosophy was that whoever walked through the door or called on the phone or whom I dealt with in the field, I treated with respect, the way I would like to be treated.  I worked with County, State, and Federal agencies on a variety of issues such as lake water quality, air quality, sewer district formation, county solid waste, school lunch programs, rabid bat incidents involving school children, etc.  I found there was always a solution to every problem when you can sit down and talk face to face with people at any level.  If elected, I will utilize my communication skills and problem-solving abilities to serve the residents and business community of Sandpoint.

1. How many city council meetings or city committee meetings have you attended in the past year?
I’ve attended most of the monthly meetings of the Sandpoint Historic Commission for the past five years and about a half dozen City Council meetings in the last year.  When the City was adopting the latest Comprehensive Plan, my wife and I attended all the public hearings and 19 of 22 workshops the Council held to rework the plan presented them by the Planning Commission.

I decided to run for City Council after being encouraged to do so by several residents and business owners, who expressed concern over the direction the City has taken in recent years.  They like my common sense approach and communication style and feel I would be a good voice to represent their concerns.  When a friend heard I was running for City Council, she commented that she didn’t know anyone more civic-minded or who loved Sandpoint more than I do.

I’ve been a resident of Sandpoint longer than some of the other candidates have been alive. I’m well-acquainted with the history of Sandpoint.  I know the good, the bad and the ugly about what’s happened here the last 40 years.  On many issues, we don’t need to get caught up in all the warm fuzzies and reinvent the wheel.  We can stick to the basics and learn from the past.

2. Among the myriad issues facing the city at present, what do you consider the single most important issue, and why? Please describe any other issues you feel are important.
Supporting the local business community is the most important issue, as I see it.  When the City gets out of the way and actually supports the local businesses instead of micro-managing them, that will promote a strong local economy, providing good jobs for City residents and a welcoming climate for new business ventures.

3. The city contributes funding for the SPOT bus, which provides daily free transportation between Sandpoint and Dover, Ponderay and Kootenai. SPOT officials this year have asked for a larger contribution from the city; do you favor or oppose increasing the city’s contribution to the SPOT bus?
I support SPOT and believe it offers an extremely valuable service.  With a City budget of $27,000,000, I believe Sandpoint should be able to find an extra $18,000 to come up with our share of the funds for SPOT.  My first reaction was that riders should be expected to pay a token fee for the service, but when I sat down and talked with the former director, I learned that every dime taken in from ridership fees would be subtracted off the top of the grant money SPOT receives.  It would be a no-win situation.

6. As of October 1, the Downtown Sandpoint Business Association was dissolved and the city awarded the Greater Sandpoint Chamber of Commerce the contract to manage the downtown Business Improvement District. Do you have a position in regards to the management of the BID?
The consolidation of many into one and the saving of valuable resources is always a good thing.  I’m hopeful this will work out well for Sandpoint businesses.  I believe Kate at the Chamber will try her darndest to make it work.

7. Seeking to revoke a decade-long joint powers agreement, the Independent Highway District has begun withholding an estimated $370,000 per year of tax money paid by city residents that has been going to the Sandpoint street department for maintenance. The city has filed a lawsuit to have the joint powers agreement declared valid. Do you support the city's position in this case?
I feel the City was too quick to file a lawsuit.  The first step should have been to sit down with the IHD commissioners and find out all the facts.  If Idaho code is correct, and the IHD cannot turn over all the tax money to the City of Sandpoint, we’ll be in a world of hurt.  Litigation costs taxpayers money.

8. Many streets in town have no sidewalks, or only partial sidewalks, and require pedestrians to walk in the street. The city's Pedestrian and Bicycle Advisory Committee has proposed a long-term plan for sidewalk improvement that would require installation and repair of sidewalks when residential properties are sold. Do you favor or oppose this proposal? What solution would you propose for construction and maintenance of safe sidewalks through town?
I’m opposed to the new proposal.  The City of Sandpoint passed a sidewalk plan in November 2010.  Why has that not been implemented to date?  There’s no need to reinvent the wheel here.  If we have a plan, let’s follow it.

9. The aged Memorial Field grandstand faces likely condemnation within a few years. City Council has approved final design for a $1.2 million grandstand reconstruction project, with fundraising undertaken by the nonprofit Friends of Memorial Field. Would you support allocating city funds for the grandstand project?
I do not support using City funds for the grandstand project.  City voters firmly said “no” to this project at the ballot box.  I support the nonprofit Friends of Memorial Field’s efforts to replace the stands, but not with City tax dollars.