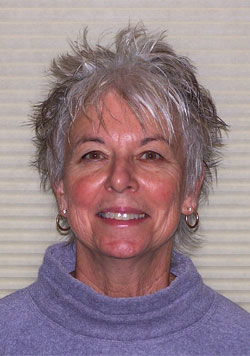 Age: 61
Years of residence in Sandpoint and Bonner County: 18
Marital status/family: Married, 2 children, 2 step-children, 6 grandchildren
How can the public contact you?
[email protected] or 208-263-1277

Qualifications
Education: I hold a BA in English from Sacramento State College.
Recent employment history:
I am retired from two careers – the first as a social worker in adult and children's services and the second as a mental health professional.
Public offices held:
Mayor David Sawyer appointed me to the Sandpoint Planning Commission where I served for 6 years as a member and chairperson. I served on the Independent Highway District tree committee, the City of Sandpoint Fair Housing Committee, the City of Sandpoint Wastewater Facility Plan Citizen Advisory Committee, and the City of Sandpoint Resort City Tax Committee.
Nonprofit groups, service or professional organizations to which you belong:
Currently I am a board member of the Sandpoint Soccer Association. My past non-profit service has been as a board member of Community Cancer Services, board member of El Dorado Council on Alcoholism, and a founding board member of Snowline Hospice. I currently am a volunteer at Farmin/Stidwell Elementary School and Sandpoint Middle School. I am also an active supporter of Independence Racing Team – a ski racing team that 2 of my grandsons participate in.
What particular experiences or skills quality you for office?
Public service has always been a part of my life. I work hard at my jobs, gather lots of information and input and value discussion with all points of view heard and respected. I believe that Sandpoint can become a community where families can thrive and I will work towards that goal.

Candidate positions
1. Among the myriad issues facing the city at present, what do you consider the single most important issue facing the City of Sandpoint?
Growth is the single most important issue facing us today. It impacts us in terms of transportation, economic vitality, infrastructure, density, housing, services and community character. Who are we as a town? What do we want to be? I feel that we, as residents of Sandpoint, have a very unique opportunity right now to shape the look and function of our town in the years to come.

2. Housing prices have increased dramatically in Sandpoint, while local wages are increasing far more slowly – effectively precluding many residents who work in the local economy from purchasing a home. For the past year city staff and a group of local employers have been searching for housing solutions. What are your ideas for creating affordable housing for our residents who work here?
This is a fairly complicated issue but I feel we are off to a good start with the creation of the Bonner Workforce Housing Agency. Projections are that in the next 20 years we will need another 3000 housing units as our population increases by  7,000 people within Sandpoint. Will we do this by requiring developers to designate a certain percentage of their units as affordable? Will be expand into our Area of City Impact to accommodate the growth? Will we increase density and change our zoning rules to allow for same? Will we advocate for increased wages for local workers? All of these are areas up for discussion sooner rather than later.

3. Two resort city tax proposals will be on the ballot in November. Do you favor or oppose continuing the existing 5% tax on lodging? Do you favor or oppose the new proposed 2% tax on liquor by the drink? And in each case, why?
I favor the continuation of the 5% tax on lodging (which I see as rather modest) because it directly results in visitors paying some of their share for the provision of services.

I am not in favor of the 2% tax on liquor by the drink because I think it will impact local folks as well as tourists and the design of the legislation is directed at tourists – not locals.

4. What conditions – for example, impact fees or provisions for affordable housing – should the city place on requests by adjacent property owners for annexation into the city?
I am not a big fan of annexation into the city. I feel that will simply create more urban sprawl, compound our transportation problems and make excessive demands on our infrastructure. If areas are annexed, I support the use of impact fees and provisions for affordable housing. I would also want to see park development an integral part of any new living areas.

5. Downtown traffic and parking are two oft-cited city ills. There are efforts currently under way by the City and the DSBA to improve parking. Do you think these efforts are on the right track?  What would you do to improve parking downtown?
I think a parking problem is a matter of perception. For me, I don't see a problem. I live in town and can walk, ride my bike or drive to do shopping and errands. When driving, I have never had to walk more than 1 block to get to my chosen business. The expectation of being able to park right in front of the business we want to patronize is unrealistic. I do believe that upon the streets being returned to the city we should return to diagonal parking which creates a lot more parking opportunities. I would also like to see a return to 2 way streets.

Traffic is another issue. As we all know, the last 2 or 3 weeks in the summer are a nightmare in Sandpoint. On an ongoing basis the truck traffic is frustrating. I think that some of the solutions (timing of lights, restriping, extra lane by the Chamber of Commerce, right of way parking) are good suggestions and should be furthered discussed and negotiated with ITD. I also think we as a city need to re-evaluate our permitted truck routes and protect residential neighborhoods. Although the cattle trucks going through town represent only a small percentage of the truck traffic, I think we should adopt Bonners Ferry's tough approach with them. What is trucking's economic interest in coming through Sandpoint? Are there other routes they could take to get to Pasco, for instance, that wouldn't include a trip through Sandpoint?

6. Although the Idaho Transportation Department was recently granted a permit for the Sand Creek bypass, it has conditions to meet and also faces a lawsuit from opponents. As the bypass will have major impacts on the city, voters want to know where candidates stand. First: Do you favor or oppose the Sand Creek route for a bypass, and why? Second: Among the issues involved, an offer by ITD to give the city land alongside the bypass in exchange for maintaining a new park has been a matter of contention; do you favor or oppose that proposal? Third: ITD has made no commitment to turn control of the Highway 95 route along First, Cedar and Fifth back to the city after the bypass is built; do you believe that should be a condition for the city to support the bypass?
First: I favor the bypass going down Sand Creek because I do not see another viable option. I am, however, very concerned about the impact on local businesses during construction, and the haul roads and routes that would be used to transport materials in and out. I see the city's role as an advocate for town during the construction process to minimize disturbance.

Second: If the city is able to financially handle the addition of the park or parking lot given by ITD, I would be in favor of accepting it.

7. On traffic issues: even if construction of the bypass begins soon, ITD says it will take several years to build. Do you believe the city should seek traffic solutions more immediately – and what would they be?
As I discussed in #5, some of the suggestions of the DSBA and the city should be pursued. I would also be supportive of public transportation to the downtown core as a part of the solution to our traffic problem whether it be in the form of deviated fixed route service, dial-a-ride, park and rides or a combination of approaches.

8. Why are you running for public office? If you are elected, how much time will you be able to devote each week to your position?
I am running for a seat on the Sandpoint City Council because I have a very strong sense of community service. Sandpoint is at some crossroads right now, and I would like to be a part of the solutions that we decide on. Since I am retired I have an ample amount of time to devote to the job.

9. Describe any other issues you believe are important; why you consider them important; and your position on these issues.
A. The comprehensive plan is a tremendously important document which is being developed at this time. It will serve as a blueprint for the quality of life for Sandpoint in years to come. I look forward to seeing the final draft and the discussion/negotiation that will ensue.

B. I believe that what I call Central Sandpoint (those areas bordered by 6th Ave/Boyer to Division, and Cedar to Baldy, have been greatly neglected by the city in terms of sidewalks, safe bike and pedestrian routes to schools and the business district, street maintenance and parks. I would like to the see the city's level of service to this area improved.

C. I believe that it is imperative for financial and planning reasons that the city cooperate with others to develop a regional approach to wastewater management.

D. The city bears the burden for the provision of recreation programs in all of Bonner County. I support a county wide recreation district which would more equitably distribute financial responsibility for our park system and encourage the development of parks/programs in outlying areas. This would also create an opportunity to develop facilities for additional areas of interest.

E. Our oldest neighborhoods are at risk of zoning and use change. I advocate real historic preservation of these areas.

F. The light industrial area around the airport has tremendous potential for economic development. I support the city taking an aggressive role is seeing this happen.

G. Our present code and permit enforcement is not very effective. I would support the city improving its methods of compliance.

Thank you very  much for the opportunity to present my ideas and thoughts. I am open to input on any of my positions.