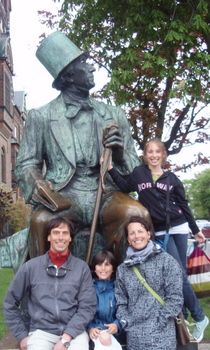 Nonprofit groups, service or professional organizations to which you belong:
Elks Lodge #1376 in Sandpoint; donor to various local non-profits

What particular experiences or skills qualify you for office?
As a current Council member, I believe I bring an open mind to the decision making process; I work hard to reach a reasoned decision based on the information provided by citizens, applicants, staff and my own research. I believe my experience with zoning ordinances and the Comprehensive Plan is an asset; My ability to work for a more balanced result when differences exist.

Implementation of the Comprehensive Plan. It is the critical link in maintaining the Sandpoint each one of us loves and managing the growth that occurs because of people who love this place. It effects businesses and neighborhoods, the environment and the economy; the built space of our community is what we interact with everyday.

2. The city held an election in May for a $20.5 million bond to expand and renovate the city’s lake water treatment plant, which was defeated. The bond proposal will again be on the ballot on Nov. 3, this time for an amount of $17 million. Do you favor or oppose the bond, and why?
I am in support of the water bond. The City has the responsibility to plan for future development within the current boundaries of the city. Without the bond approval and the possible grant funding, the potential costs to city residents may go up dramatically. Or we will be faced with other options that dramatically alter our water use and its costs.

3. The Federal Aviation Administration has voted to cut off all funding for the Sandpoint Airport, located in the city limits off North Boyer, due to infractions that arise largely from the Silver Wing fly-in residential development adjacent to the airport. The county is losing $150,000 a year in federal funding, plus possibly millions in grants for capital improvements. Do you consider the airport an important asset, and what actions would you take, if any, to facilitate a resolution?
The airport has allowed high quality manufacturing to become part of the local economy, bringing good paying jobs to the residents of Sandpoint/Bonner County. The city should look to the county and the airport board to provide a more thorough review of the specific issues that must be resolved. Supporting the airport with updated zoning laws consistent with FAA standards should be explored.

4. In a tie vote by the council, with the mayor casting the deciding vote, the city recently rejected a call for the city to stop fluoridating its water. The issue may surface again, possibly as an initiative or referendum. Do you favor or oppose the fluoridation of city water, and why?
As a council member, I voted no on this issue. As with medicine generally, I believe the delivery of fluoride is best determined by parents and Dentists, not our city.

5. The Idaho Transportation Department is in its first year of construction on the Sand Creek bypass, with likely 2 to 3 more years to come. Overall are you satisfied or dissatisfied with the construction project and its impacts on the city? What issues do you see arising for the city from the construction and completion of the bypass?
The biggest issue we face going forward is the future management and expense of our downtown streets and traffic flow patterns. The city should work to insure we have the necessary control of downtown streets to properly plan for future development and redevelopment within the downtown core. The state and the city must work together to put a plan into place that allows the city to manage the streets and receive the funding to make necessary upgrades.

6. One impact of the bypass has been concerns it raises with Burlington Northern Santa Fe about parking and access to the Amtrak stop at the historic Sandpoint train depot. The depot continues as a stop but the building has been closed for months due to disrepair. BNSF is considering to abandon the depot as an Amtrak stop. What would you like to see happen with the depot and Amtrak stop in downtown Sandpoint and what role, if any, would you play as a council member?
Losing the stop would be a negative for everyone involved. The Historic Commission has done a fabulous job of spearheading efforts to retain the Amtrak service in Sandpoint. We should be proud of their work. The renovation of the facility will likely take an innovative approach by BNSF, Amtrak, the city and other interested partners.

7. Growth remains a major issue. The city this year completed a long process to adopt major changes to its comprehensive plan. As a tool to manage growth, are you satisfied with the new comprehensive plan? Describe your own posture toward growth in Sandpoint.
As a member of the P&Z and the Comprehensive Plan Steering Committee, I believe the process was a very good one for the entire city. The next step is to enact zoning revisions that incorporate the changes sought under the new plan. I believe growth will occur and change is inevitable. The ability to translate the community’s vision into reality will take well designed ordinances. The results, good or bad, will be with us for decades.

8. One growth-related issue is housing. Do you think the city should play a role or be proactive in securing affordable and work-force housing in Sandpoint?
I believe the city has an interest in promoting the availability of both affordable and work-force housing. We cannot have a vibrant commercial and social community if only people with higher income levels can afford to live here. We have diverse income levels in Sandpoint and our housing options should reflect that reality.

9. How would describe the economy of Sandpoint today? What role do you see for the City Council to play in creating a healthy local economy?
The economy in Sandpoint is suffering with the rest of the country. We will continue to work with various groups (SURA, downtown business, EDCS) to improve the infrastructure of Sandpoint to allow the businesses and citizens of Sandpoint to thrive once the economy rebounds.

10. Why are you running for public office? If you are elected, how much time will you be able to devote each week to your position?
I believe I can help make a positive difference in Sandpoint. That is my goal, whatever the issue. There is no answer to the time question, except to say I will prepare myself to the best of my ability while maintaining separate work and family lives. I have done this since I started on the Council in June, a meeting that went until 2:30 in the morning. Devotion of time is not the issue, making good decisions for the benefit of the people of Sandpoint is the issue.