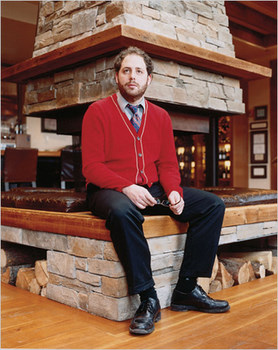 What particular experiences or skills qualify you for office? I care, I listen and I act quickly. The current challenges we face require we do more than sit around talking for (literally) thousands of hours. We need to act now to revive our local economy and protect our quality of life.

Growth. We need to ensure that Sandpoint determines Sandpoint's future. To me this means fully enacting our community's new Comprehensive Plan to promote the growth we want and regulate development that would harm our quality of life. Private Property Rights are important, but no one has the right to destroy a neighborhood or pollute our water.
I am a proponent of economic development and community-minded zoning. We don't have to sacrifice the things we love about this community to create jobs. In fact, our lake, our mountains, our traditional Downtown, our walkable streets and our parks all help us economically: they attract and retain employers. We need to continue to enhance what we love and not buy into false choices.

2. The city held an election in May for a $20.5 million bond to expand and renovate the city’s lake water treatment plant, which was defeated. The bond proposal will again be on the ballot on Nov. 3, this time for an amount of $17 million. Do you favor or oppose the bond, and why?
I voted to place the Bond on the ballot. I will be voting against it. I believe that strict water conservation measures are the best approach to our current challenges. That said, if you want to (for example) be able to water your lawn whenever you wish, the most affordable way to ensure that happens is to vote for this Bond. Personally, I believe lower rates for most residents are more important. Please sincerely think about what you personally value when you go to the polls and vote accordingly. This is an important issue and unfortunately either option has significant downsides.

3. The Federal Aviation Administration has voted to cut off all funding for the Sandpoint Airport, located in the city limits off North Boyer, due to infractions that arise largely from the Silver Wing fly-in residential development adjacent to the airport. The county is losing $150,000 a year in federal funding, plus possibly millions in grants for capital improvements. Do you consider the airport an important asset, and what actions would you take, if any, to facilitate a resolution?
The airport is an important asset for future economic development and, for that matter, because of the jobs provided there today (particularly at Quest). I would have voted against the SilverWing development. The best use of the property was to create jobs for local residents, not to build homes for literally "fly-in, fly-out" resident-tourists. Council members who voted for it should be held accountable.

4. In a tie vote by the council, with the mayor casting the deciding vote, the city recently rejected a call for the city to stop fluoridating its water. The issue may surface again, possibly as an initiative or referendum. Do you favor or oppose the fluoridation of city water, and why?
I favor fluoridation of city water, but don't believe my opinion should be the end of the issue. I pushed, with Councilman Snedden, to place this item on the ballot to let the voters decide. Unfortunately, no one joined us.

5. The Idaho Transportation Department is in its first year of construction on the Sand Creek bypass, with likely 2 to 3 more years to come. Overall are you satisfied or dissatisfied with the construction project and its impacts on the city? What issues do you see arising for the city from the construction and completion of the bypass?
Construction is going well. The disruptions have been minor considering this is an over-$100 million project (and I say that having been stopped for over 3 hours on the Long Bridge twice). Generally, people who hated the project still hate it and people who liked it still like it.
Here's what's important: We need to ensure that our downtown streets are returned to us with reversion dollars when the project is completed. This is a realistic possibility, but it won't happen without constant lobbying from our city officials. All of us, myself included, need to work harder to make local control of our transportation system a reality.

6. One impact of the bypass has been concerns it raises with Burlington Northern Santa Fe about parking and access to the Amtrak stop at the historic Sandpoint train depot. The depot continues as a stop but the building has been closed for months due to disrepair. BNSF is considering to abandon the depot as an Amtrak stop. What would you like to see happen with the depot and Amtrak stop in downtown Sandpoint and what role, if any, would you play as a council member?
The Depot and Amtrak stop should be maintained at their current location. Plenty of funding exists to accomplish this goal as part of the Byway project (over $900,000). Estimates by two local citizens (an architect and an engineer) and ITD preservationists suggest this can be done within the funding available. The City may have to own the structure for the funding to be used (for a number of silly railroad and federal regulation reasons). If we don't do our small part to ensure the preservation of the Downtown Stop and Historic Depot it would be a terrible mistake.

7. Growth remains a major issue. The city this year completed a long process to adopt major changes to its comprehensive plan. As a tool to manage growth, are you satisfied with the new comprehensive plan? Describe your own posture toward growth in Sandpoint.
The new Comprehensive Plan represents the will of our Community. Let's be clear: it's a legal governing document and we are obliged to strive for its goals as your representatives, as is the Sandpoint Planning and Zoning Commission. Hundreds (if not thousands) of residents worked on this plan. We owe it to them to not water down its initiatives and to ensure that we put in place the zoning it evokes.
So what does the Comprehensive Plan envision? "Historic ... neighborhoods set on a traditional street grid with small Accessory Dwelling Units, an urban forest, active alleys, on-street and alley parking, walkable streets and a variety of housing types intermixed on the same street."
"Individual structures should respect the scale and character of the built environment with the bulk, mass and architecture of new structures being harmonious with existing residents in their vicinity."
The density and specific size of buildings varies depending on the zone, but this statement captures the general vision of the document. To me, it's all about keeping Sandpoint, Sandpoint.

8. One growth-related issue is housing. Do you think the city should play a role or be proactive in securing affordable and work-force housing in Sandpoint?
Yes. Mainly we can do this by zoning (as in the case of how we allowed small accessory dwelling units or alley houses throughout the City last year). But we should also work with Urban Renewal to see if additional carrots can be created to encourage affordable housing. We also should work with local banks to encourage the creation of loans for small, more affordable homes.

9. How would describe the economy of Sandpoint today? What role do you see for the City Council to play in creating a healthy local economy?
The economy is terrible, but then you likely didn't need me to tell you that. By now, we all know someone out of work or otherwise suffering from the awful state of the economy. As a small business owner, I certainly have felt it. Life is tougher than it was even a year ago (or, for that matter, six months ago).
That said, it's important that we don't just accept any economic growth as a positive. Some developments could actually hurt our economy long-term by reducing our quality of life, which is our best selling point to quality employers. We need not only more, but also better-paying jobs.
So far, the City has:
1. Created a new business incubator at Panhandle State Bank.
2. Aggressively pursued Stimulus dollars (I was against the Stimulus, but there's no reason we shouldn't get our fair share) - particularly for high-speed internet, which will help businesses that are already here grow and potentially attract new employers with good-paying jobs.
3. Continued to hire when vacancies occur. As one of the area's biggest employers it's important that we don't - unless absolutely forced - contribute to our already high unemployment rate.
4. Removed onerous parking requirements and fees in the Downtown allowing Joel's to expand and new local businesses to open (before the changes, Joel's would have had to pay tens of thousands of dollars in fees for their recent expansion).
5. Authorized Urban Renewal to enact Sandpoint's Downtown Revitalization Plan.

I believe that this is more than most cities, but we still haven't done nearly enough. We should:
1. Grant Urban Renewal more flexibility in promoting positive economic growth and affordable housing (people need a job and a place they can afford to live). This would include issuing "Requests for Proposals" to attract the kind of development we want.
2. Zone to encourage positive growth, where we want it and how we want it. Make sure new growth aids neighboring businesses by creating additional vitality rather than empty parking lots.
3. Refuse to issue new forms of taxation, such as a "Drink Tax" or the proposed Fire fees.
4. Allow the Farmer's Market to expand around Farmin Park, including considering shutting down a street for their Saturday markets.
5. Work with the Downtown Sandpoint Business Assocation, Chamber of Commerce and BCEDC to bring new businesses focused on serving locals to Sandpoint - particularly to the Downtown.
6. Hold a summit with Downtown Property Owners to discuss revitalization efforts and other actions the city can take to aid them. See what can be done to convert upstairs units back into residences.
7. Move City Hall back Downtown. The proximity of both visitors to city hall and city employees would create additional business for Downtown businesses.
8. Preserve the Amtrak Stop and Historic Train Depot. These can be used to create economic growth where we want it - in our Downtown.

That's a start, but obviously there is more that we can and should do. I suspect that if the City becomes more involved in local economic development additional steps will quickly become apparent.

10. Why are you running for public office? If you are elected, how much time will you be able to devote each week to your position?
I am running for Council to enact the new Comprehensive Plan. Doing so will help us grow our local economy in a way that is consistent with our values and ensures that are neighborhoods are protected.
On a slow week, I spend at least 20 hours on Council business, more often twice that - but too many people are proud of the hours they work rather than what they accomplish.
Long and numerous meetings are nothing to be proud of. In fact, they're one of the leading reasons ordinary people don't become involved in local government. We need to work harder to make it easier for every resident to have a voice in the decisions we make as a community.